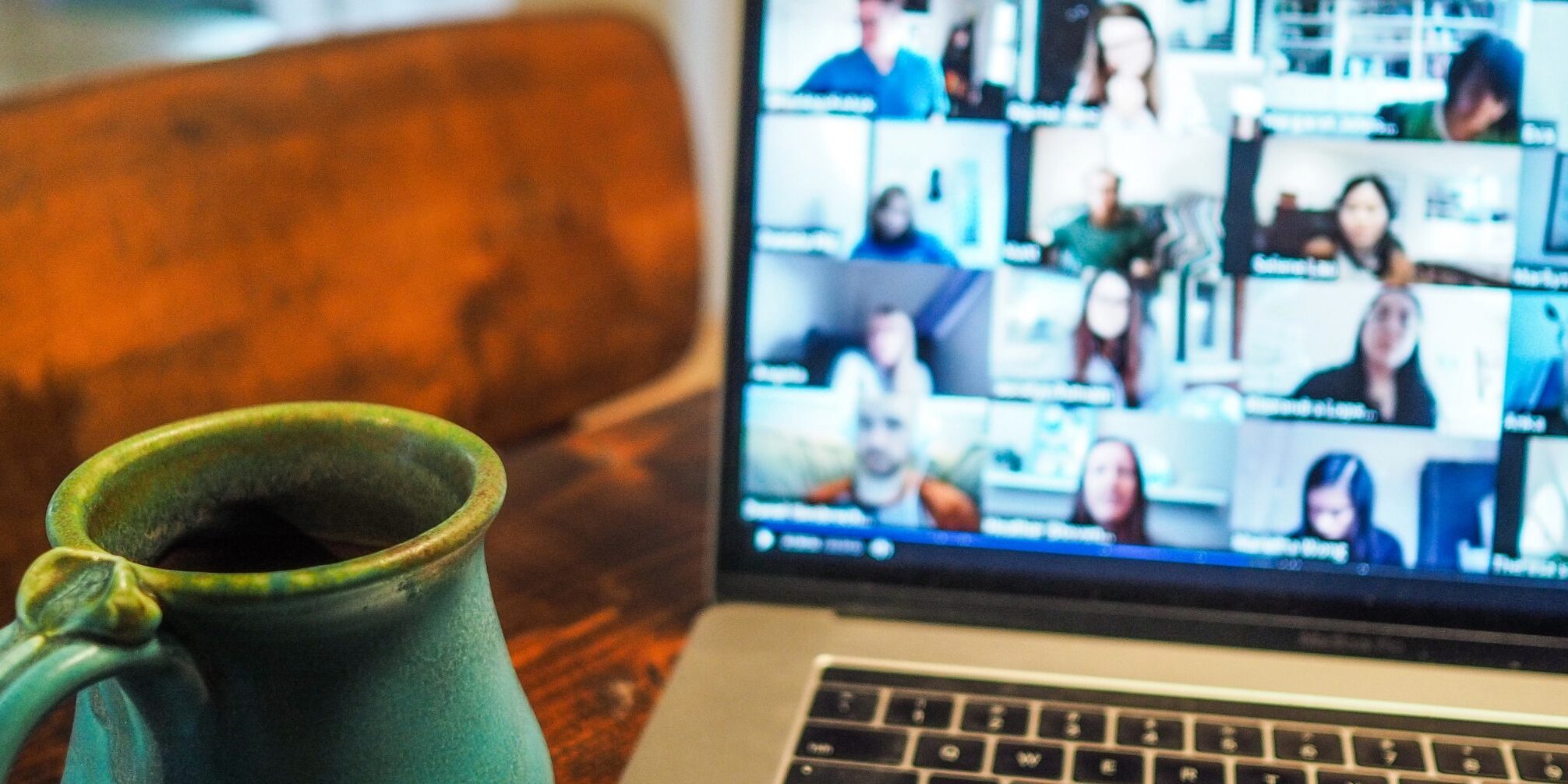 Like many people this year, working remotely went from an occasional occurrence to an enforced environment. Throw in some kids being “home schooled-ish” and a national shortage of toilet roll and you’ve got the ingredients for a nightmare ready to roll…

Luckily, we were pretty much good-to-go from an enablement point of view with cloud based services for most tooling and more traditional remote access for everything else. However, what I was not prepared for was the move to entire days filled with video calls.

At the start, the default behaviour was to try and replicate an office environment using video calls. When you wanted to talk to someone, you’d book some time that inevitably got filled…so much so, that whole days would pass with nothing but back-to-back calls. Most would include some pleasantries, people asking if you could hear them or being told they were on mute and lots of kids or pets injecting welcome relief to the relentless onslaught of talking heads bobbing about in boxes.

Blurry images, crackly audio, background noise, poor lighting and so on. None of these things truly matter, they’re not critical to getting stuff done and they’re certainly not top priority in an emergency. However, as we move away from survival mode and more towards the “new normal”, which I’m betting will become known as “normal” in time, we could take a bit of time to start improving them.

For remote working to become a true replacement for offices I think we’ll need a much more immersive way of interacting. Virtual Reality is probably the answer, but it’s not widespread enough yet to be effective. I was “lucky” enough to get an Oculus Quest before they sold out everywhere and have been keen to try out every form of social interaction using it…but it hasn’t reached critical mass yet and the social platforms are still quite a way off feeling natural.

So, VR aside, how can we make the standard video call experience better?

I had a desk, a chair, a gaming pc, a webcam (from 2010) and a headset with boom mic…I thought I was golden…Then the kids got sent home.

Working downstairs was no longer an option, so I was in a kid’s bedroom with a laptop, headset, a stool and an increasingly “fuzzy maltezer” haircut.

And yes, that isn’t a virtual background…I painted it…I won’t ever be doing that again.

This set up gets uncomfortable…fast, so I quickly moved to a noise cancelling lapel mic for about £10 that meant I could remove the headset, still sound ok and look a little bit less like a 1960’s DJ…

It worked well, but I wanted more

I’d played around with the kids using Facerig, a real time facial animation piece of software that uses your webcam and some fancy tricks to turn your face into a fox, or a dragon…or a burger. It kept them entertained for long enough to do a parental task or two. That’s a winner in my book…

Clicking on the various buttons, I realised you could output the video as a “virtual cam” which could be used by any other software that required a webcam.

Could I join team meetings as a burger?

Yes, yes I could.

Should I? who knows? It’s obviously not a good idea to turn up to a big-boss pitch masquerading as a talking hotdog…but for the casual all-hands Friday sessions — why not?

It worked and it opened my eyes to the potential of virtual cams. They can be used in any video conferencing software (Zoom, Teams, Google Meet etc) as if they were genuine webcams — no specific plugins or extensions required…happy days!

Coincidentally, my son was getting into watching Minecraft streamers slamming their (endless…oh….so…endless…) wares onto the Internet…and besides learning more than I need to about crafting an enchanted diamond pickaxe with fortune III, I was also impressed by the production value of their video.

Lots was added in post-production, but a fair bit was live. What were they using to create their streams and could I use similar software for work?

It turns out, not only is it possible, but the software is open source, easy to use, outputs as a virtual cam and bloody fantastic! The rabbit hole starts here…

Open Broadcaster Software, (OBS), is a great piece of kit. Within minutes you’ll be slapping images onto your standard webcam feed and using that on your work calls. The temptation is to go hard and I fully endorse that. If you want your name in flashing neon, your company logo spinning and flaming and some “achievement” badges that you earned when you were 10 — stick them all on.

Then dial it back — stick to the essentials, who are you, where do you work, what are your key achievements? Keep the dancing banana gif for special occasions and of course keep the flashing bullshit button in your back pocket…

It became obvious that I needed a better webcam. Unfortunately, so did the rest of the World. The popular models sold out everywhere.

Having done a bit of research, it appeared that the popular choice was the Logitech C920 / C922. Logitech are the video call / streaming standard and the brand that everyone wants to beat. Bucking that trend, I went for the Razer Kiyo, it had a built in variable light and fared well in reviews. However, having ordered it March, it still hadn’t arrived by August and I was beginning to have second thoughts. I could handle lighting separately (of course I could!) and concentrate on video alone for my camera…I cancelled the order and went for a white LogiTech Streamcam (white is cheaper and more available than black).

It’s brilliant, full 1080p 60fps goodness, with lots of extras that I’ll probably never need in their Capture software, but also great on its own. I updated all my OBS scenes to use the new camera.

My video feed was now badged, animated and crisp and producing output suitable for all video calling software.

…and my hair was beginning to go a bit Tintin

There’s really no upper limit on audio equipment and I didn’t want to go nuts…but I did want a pop filter, cardioid pickup and usb connectivity. After much deliberation, I went with a Sudotack Condenser Mic Kit on a recommendation from a colleague and I wasn’t disappointed.

Having said that, it’s worth noting that I use Windows and the “microphone boost” option is disabled for usb condenser mics. This means it sounds great when you’re right next to it (like a studio) but it’s disappointingly quiet when you’re casually distant (like video calls). To get round this, I installed Equaliser APO to boost the mic and Peace Equaliser as a UI to configure it. For info, I set “Pre Amplifying” to 13 — which seemed to give the required boost without distortion.

To combat any background noise, I added “noise suppression” and “noise gate” audio filters to the mic in OBS

STAGE 6 — WE ALL SCREAM FOR GREEN SCREEN

So far, so good, but we’ve still got to tidy up after the kids to make it appear like we live in a “normal” tidy house.

Oh no we don’t… Don’t worry about mess and get right down in the rabbit hole with me. What you need is a green screen. It sounds fancy, but it’s really not (the clue’s in the name — that’s literally how fancy it is). However, having said that, I have found this the most challenging of all the elements…both in terms of cost justification and necessity.

Let’s face it, you don’t need a green screen. No one needs a green screen. But wouldn’t it be cool if you could appear as a talking head with zombies trying to get at you or present a full size screen rather than be contained in a square box all the time.

If like most people, you think, nope, then skip this section, but if that does sound good, read on.

I started off with a cheap green cloth and frame that my partner used for selling clothes. However, it took quite a while to set up and didn’t get great results due to the reflectiveness and wrinkles. No one has the time or inclination to iron a green screen so I decided to go big with this purchase. I wanted something that was quick to setup / collapse and would get great results every time. Aside from professional rigs, the best you can buy is the Elgato Chroma Screen and that’s the one Iwent for. It’s the most expensive part of the set up, but well worth it in my opinion. It does open your eyes to all the other Elgato equipment but try to keep them shut, get this and move on quickly!

Once you’ve got a green screen, it’s simple to add a chroma key filter to your web cam in OBS and then you’re free to add the classic static photo of a beach to your background or something more funky like a full on rave scene. I’m a column B kinda guy.

STAGE 7— LIGHT IT UP

The main problem with getting green screened up is that it opens your eyes to the necessity of lighting. Poor lighting makes your face go all terminator II and might fuzz up your funk somewhat.

The answer is to get some lighting to help your webcam out and get rid of shadows. There’s lots of advice online, but it frequently ends up recommending expensive solutions.

The dream is to get some Elgato Key Lights but they’re pretty hard to justify for casual use. However, there’s plenty of alternatives to choose from. Many are battery powered or not bright enough, but I’ve found that the Neweer Video Light is more than powerful enough and you can get by with only one provided you position it over your webcam. If your green screen is within a metre or two, you probably won’t need any additional lighting

This is my journey down the remote working rabbit hole. It’s taken a lot of trial / error / research / tears to get this far. I hope it proves useful to someone, somewhere who wants to up their remote working game.

It comes to about £400 all in and I would have spent more than double that on fuel over the last 6 months… so I can justify it by saying I’m basically saving money and learnt a lot along the way.

If you want to take advantage of my journey down this rabbit hole, but skip all the reasearch and trial and error, here are the shopping links to get the kit…None of this stuff is top end (except the green screen), but it all works really well and is more than good enough for taking your remote working experience to the next level.